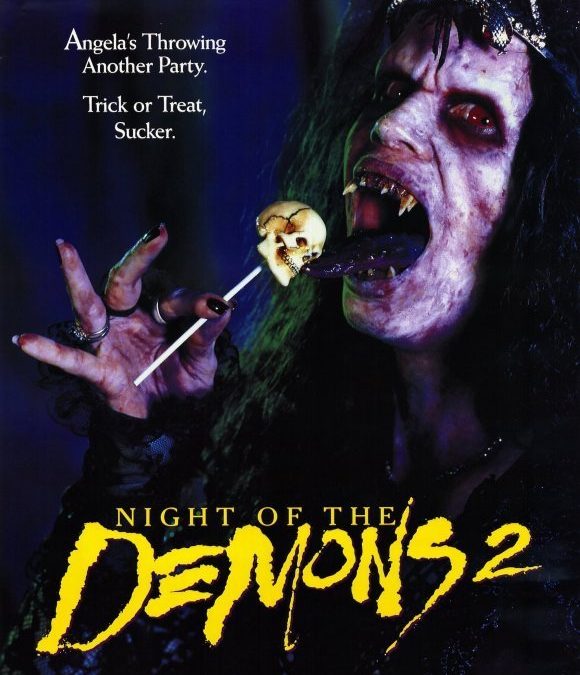 The girls from a Catholic high school find themselves caught in the middle of a struggle between the forces of good and evil when they return to the haunted house from the first film and spend another gory Halloween night there.

Synopsis – Catholic school students who are banned from the school’s Halloween party for having sex at a previous bash meet in an abandoned home from which previous partygoers never returned. Among them is Mouse, a timid younger sister of Angela, who has become the ruling demon at Hull House. The kids are killed and become demons. Three people associated with the school come to fight the demons: the head priest, a ruler-wielding nun and a nerd obsessed with Satanism. They find imaginative ways to kill some demons.

Critics’ Kudos:
Brian Lowry, Variety: “Blessed with some inspired bits of comic lunacy (would you believe a nun battling Satan’s minions with holy water-filled squirt guns and balloons?), this follow-up to a 1988 horror pic rises above most slice-and-dice fare and may tantalize some more discriminating palates in addition to the usual teen suspects.

“Despite genre cliches–such as frequently disrobed teenage dimwits holding a Halloween bash in a creepy old house–Demons 2 offers reasonably impressive special effects given its obvious budget restrictions. In addition, director Brian Trenchard-Smith plays the material for laughs wherever possible, and even with a few unintentional giggles the result is a smarter, gentler movie than most teen-oriented slasher pix.

“Jennifer Rhodes is a hoot as the Rambo-ized nun, taking to the challenge with martial skill and intensity. Zoe Trilling deserves kudos as the bad girl who becomes really bad. Tech credits are solid given the three-week shooting schedule.”

Brian J. Wright, The Cavalcade of Schlock: “I have no problem with my abhorrently sexist admiration for this movie. Angela’s back in a sequel that [is much better than] its predecessor. There are three big selling points for this one: the plentiful gore, the goofball tone of the whole thing and the serious babe factor.

“As for the goofball stuff, here’s a sample. A demon-possessed, decapitated teen is playing basketball with his head. Later, a normal human teen decides to play soccer, the ersatz ball complaining all the while. Needless to say, I cracked up. (Another nice touch is an ass-kickin’ nun who wields her ruler like a mighty sword of steel).

“And the babes…mmm…yummy. They come threefold, not to mention the bit players. The first is Shirley–busty, bitchy and a shade butchy; she’s a bad girl, played by Zoe Trilling. She’s involved in no less than two lesbian kisses. The second is Terri, played by Christine Taylor, before she ‘broke out’ by playing Marsha in those Brady Bunch movies. And the third is Bibi, played by Christi Harris. Bibi might just be my dream girl–sweet, kind-hearted and rips off her clothes at the drop of a hat. God help me, she’s enough to get me to watch Sunset Beach!

“This may just be the greatest film ever lensed. Okay, maybe not the greatest, but it’s pretty fun.

Travis Lowell, Toxic Universe: “Naked girls everywhere! The women in this film are pretty damn hot–they are exactly what the male horror aficionado will likely be looking for in a B movie gorefest.

“I counted seven dead humans and six dead demons, plus nifty gore scenes involving exorcisms. Night of the Demons 2 features not one but two lesbian kisses! One of them involves the now-famous Christine Taylor.

“Director Brian Trenchard-Smith does almost everything in his power to make this B movie look and feel like a winner. He doesn’t do anything notably flashy aside from mimicking the infamous ‘Evil Dead cam’ in several scenes, but he gives us many instances of interesting gore and disturbing imagery. He must also be given props for putting actual death metal into the score during one of the film’s party scenes.

“For a B movie, the film is clear and crisp and packs a punch for a straight-to-video flick.
Believe it or not the acting is surprisingly decent in Night Of The Demons 2. I’d say it is actually a step above the acting featured in more notable films such as some of the Friday the 13th and Nightmare On Elm Street sequels.

“It certainly has funny, campy horror elements that most fans of the genre have come to know and love. This flick isn’t out to scare your pants off. Rather, it is a somewhat silly movie with intentions to scare all of your clothes off. If you are going into this movie looking for a mentally stimulating experience, well, you need to seek professional help.

“Night of the Demons 2 is a grotesquely enjoyable ride.”

Richard Scheib, Moria (The Science Fiction, Fantasy and Horror Film Review): “Some of the gore set-pieces are technically imaginative: some good meltdowns, a neat shot when Zoe Trilling’s breasts morph to envelop one character’s hand and particularly Amelia Kinkaid’s transformation into a giant half-human, half-snake creature at the climax. Kinkaid possesses Darin Heames and makes him start barking. The one moment the film becomes so inane that it achieves a brief surreal glory is the moment where one character dribbles and pots his own head through a basketball hoop.”

W.L. Paynecraft, HorrorWatch: “In typical Night of the Demons fashion, Part 2 wastes no time in getting started. In the first five minutes of the movie you are treated to two slayings and about a half dozen naked or half-naked women.

“The gore in this movie is again top-notch. Blood is abundant and kills are also plentiful and creative. In one scene a guy roundhouse kicks the already severed head off of a demon and another guy kicks it like he is kicking a field goal. Cheesy? You’re damn right!

“Cheesecake is also plentiful. There is even a small slice of beefcake. Traditional females and nontraditional males will be a little jealous of their counterparts, as boobs rule again!

“Some of the acting is pretty passable, and some of it will make you roll your eyes. You will pray for the quick death of at least two characters, I guarantee it.

“Overall, I loved this film. It had everything I come to expect from this series. I give it 3.75 out of 5.”

Major Cast and Crew Credits and Awards:
Special Makeup Effects: Joel Harlow (The Matrix Reloaded, War of the Worlds, Magnolia, X-Men, Dracula, Adaptation, Barton Fink, Artificial Intelligence: AI, Hollywoodland, The Toxic Avenger: Part 2; two Emmys for The Shining and The Stand; Emmy noms for Carnivole and Buffy the Vampire Slayer; another Best Makeup award and two more nominations for Pirates of the Caribbean: Dead Man’s Chest and Pirates of the Caribbean: Curse of the Black Pearl; 60 other films and TV projects).

Producers: Jeff Geoffray (Around the World in 80 Days, Shergar, Silver Wolf, Behind the Red Door and 23 other films) and Walter Josten (Wake of Death, O Jerusalem, Back in the Day, Bar Starz; Emmy for The Incredible Mrs. Ritchie; 28 other films and TV projects).

Original Music by Jim Manzie (Tales from the Darkside: The Movie, Night of the Scarecrow, The Offspring, Lurking Fear).

Film Editing by Daniel Duncan (Night of the Demons I and III, Cerberus, Guardian, Tick Tock).

Memorable Quotes:
Sister Gloria: “A kiss is a sin, when it is an upper persuasion for a lower invasion.”
—
Angela: “An ocean of holy water couldn’t help you now!”
—
Terri: The day after the party, the county sherrif went in with his deputies. They found the bodies, or rather hat was left of them. Their bodies were chopped, graded, sliced and diced, totally toasted–I’m talking ground-round. Their relatives could barely identify them, but they did. Everyone one of them, everyone except Angela, the girl who threw the party. They searched the property over and over, high and low but never found her body! They say it’s because she descended into Hell and now she’s Satan’s favourite, sitting on his lap.”

Links:
Internet Movie Database entry for Night of the Demons 2