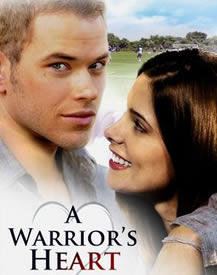 A troubled, angry lacross player attends a rigorous lacrosse camp that changes his attitudes. While there, he falls in love with the coach’s daugher.

Synopsis – Hot-headed star Lacrosse player Conor Sullivan, in shock and denial over his Marine father’s death in battle, acts out in self-destructive ways that upset his mother, Claire. But arduous training in a wilderness Lacrosse camp, under the tutelage of his dad’s old combat buddy, Sgt. Major Duke Wayne, gives Conor a new perspective.

Stars Ashley Greene (Twilight, King of California, Otis, The Twilight Saga: New Moon, seven episodes of Desire ); Kellan Lutz (Twilight, Accepted, Prom Night, Stick It, The Forgotten Ones, Deep Winter, eight episodes of The Comeback, seven episodes of Generation Kill, six episodes of 90210 and 13 other movies and TV projects) and Gabrielle Anwar (nominated for Saturn Award for The Librarian: Return to King Solomon’s Mines and Gemini Award for The Tudors; also appeared in Scent of a Woman, The Three Musketeers, Things to Do in Denver When You’re Dead, Body Snatchers, For Love or Money, If Looks Could Kill, Wild Hearts Can’t Be Broken, In Pursuit of Honor, 37 episodes of Burn Notice, 12 episodes of Press Gang, six episodes of The Tudors and 39 other movies and TV projects).

Producer: Ed Richardson (Making of Myst V, 10 Years of Tomb Raider: A Game Tap Retrospective, 43 episodes of Man Made Movie, 51 episodes of Movies for Guys Who Like Movies,12 episodes of Big Playstation Saturday and 11 episodes of The Movie Bowl).

Star quote:
Ashley Greene: “I wasn’t uncomfortable doing a make-out scene with [24-year-old heartthrob] Kellan Lutz, because we know each other so well it was kind of a no-brainer. We’ve alredy got this kind of chemistry, so it wasn’t hard at all. He’s one of my very close friends and we definitely have a platonic relationship, but playing romantic with him was easy.”