Blue Rider Pictures, founded in 1991, is an independent motion picture, TV and new media development, finance services, production and distribution company, and together with co-founder Walter Josten, has more than 140 films to their credit. In 1998, Blue Rider pioneered the emerging field of Bridge Financing, and quickly became the industry leader, helping to provide more than $100 million in short-term funding to more than 90 films with budgets ranging from $2 million to $42 million and representing more than $1 billion in production budgets. As a result of successes in the Bridge Financing sector, Blue Rider expanded to include additional finance services, such as Gap, Super Gap and Mezzanine loans in conjunction with banks and other private lenders. Blue Rider also continues to help to secure funding against receipts of future film incentive tax credits and from numerous states in the US and countries around the world.

Blue Rider founder Walter Josten has been involved in nearly every aspect of production, financing and distribution. Since its inception, Blue Rider has worked on the cutting edge of independent film financing, utilizing Pre-sales, Gap Financing, Tax Credits and other benefits to shoot pictures in nearly every region of the world.

Scores of major and independent distribution and production companies, as well as foreign sales companies around the world have worked with Blue Rider and founder Walter Josten in development, production, financing, and/or distribution. Some of them include:

Over its 30 plus years in business, Blue Rider has worked with most of the top Hollywood and European talent agencies and managers including CAA, WME, UTA, ICM, Gersh, Innovative Artists, Paradigm, Brillstein Entertainment, Anonymous Content, Independent Talent Group (UK) and United Agents (UK). The Company also works on a regular basis with many of the major players in the film finance community. Blue Rider has interacted successfully with the US states which provide tax credit incentives and numerous countries where it has produced its films or has assisted with financing, including most of the provinces in Canada, the UK, Ireland, the Netherlands, Germany, Australia, South Africa, Eastern Europe and Puerto Rico.

During three decades of a rapidly changing industry, Blue Rider Entertainment has consistently met the challenges of independent film production, financing, and distribution, and it continues to grow.

BLUE RIDER: What’s In A Name?

Der Blaue Reiter (German for “The Blue Rider”) was an art movement started by Franz Marc and Wassily Kandinsky in Europe in 1911.  The artists who took part were considered to be the pioneers of abstract art, and their work was characterized by exuberant color and profoundly felt emotion. Coming from a number of European countries, the painters, writers, poets and composers who joined The Blue Rider dedicated themselves to the search for a common spiritual basis in a new international culture. 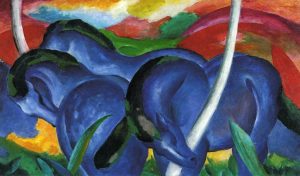 The first exhibitions of The Blue Rider included works by movement founders Marc and Kandinsky, as well as Gabriele Munter, Paul Klee, Jean Arp, Alexei Jawlensky, August Macke, Pablo Picasso, Henri Rousseau, Robert Delaunay, Paul Gauguin and Vincent Van Gogh. These artists, who early in their careers broke from the mainstream, were later to become the driving force behind modern art as we know it today.