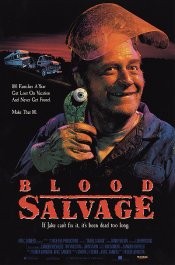 A deranged junkyard owner and his two dimwitted sons arrange car accidents on the nearby highway, kidnap the surviving crash victims and scrap the motorists’ live bodies for parts to sell.

Synopsis – Twisted tale about a crazy, preaching redneck named Jake who kidnaps people off the highway and performs sick medical experiments on them. He then proceeds to sell their organs to Mr. Stone. Everything is fine until he becomes obsessed with a handicapped beauty contestant, April, kidnaps her and finds that she is harder to control than the others.

Jon Bloom as “Joe Bob Briggs,” Joe Bob Goes to the Drive-In: “It’s got zombies, it’s got slobbering rednecks, it’s got dead tourists, it’s got car chases, it’s got maniac alligators, it’s got Elvis on life support, it’s got a helpless bimbo in a wheelchair, it got Ray Walston and it’s got the Cates Pickle Man.

“Livers roll. Kidneys roll. Eyes roll. Hearts roll. We even have a closeup spinal tap. Bras come unhooked. Blouses are ripped off. But the garbonza, per se, remains firmly wrapped.

“No breasts. Eighteen dead bodies. Two motor vehicles, with crash and burn. Eyes roll. Open heart surgery with a power drill. Knitting needle through the arm. Heart-eating gator. Gratuitous Elvis. Gratuitous bimbos in swimsuits. Shotgun fu. Ford Torino fu. Trash compactor fu. Drive-in academy award nominations for Danny Nelson, better known as the Cates Pickle Man, as Jake the junkyard surgeon, for saying ‘You look like a real HEALTHY little kid’ and ‘You don’t have any medical problems I should know about, do you?’ and ‘Where have you been? I had to staple that man up’; Ralph Pruitt Vaughn, as the fatso idiot half-wit brother for saying, ‘I’m a special person’; Ray Walston for having no reason to be in this movie, but being in it anyway; and Evander Holyfield, the heavyweight boxer for getting his name in the credits as ‘executive producer.'”

“Father Jake is a genius yet totally deranged surgeon/religion freak who, with the help of his two sons Hiram and Roy, removes the healthy organs of innocent people and sells them to a sleazy elderly guy on the black market.

“Pretending to own a towing-service, Jake picks up the happy Evans family on their way home from a beauty contest, where the gorgeous but crippled daughter April ‘almost’ won. He takes an interest in April, as he thinks he can cure her damaged spine, but the young girl is tougher than she looks and fights back. Mad Jake contains quite a lot of grisly images, as these weirdos keep all their victims hanging more dead then alive in a barn, and April’s desperate attempts to escape result in the occasional flashes of sheer suspense. The villain characters are rather interesting, especially the oldest son Hiram, who wears shirts of Lynyrd Skynyrd and claims all women are dirty whores. He also drives a truck with nasty spikes attached to the front and spontaneously starts fights with heavyweight boxing champions (a cameo by Evander Holyfield). So, you see, there’s even a fair share of effective humor in this sadly forgotten horror movie!

“The acting performances are more than adequate with enthusiastic lead players and respectable names in the supportive cast. John Saxon, a personal favorite of mine, stars as April’s loving father, and Ray Walston briefly appears as the organ dealer, eerily dressed in black. Highly recommended to fans of solid B-horror, if you can find it somewhere.”

Stars Danny Nelson (A Time to Kill, Fried Green Tomatoes, Midnight in the Garden of Good and Evil, The Legend of Bagger Vance, Songcatcher); Lori Birdsong (High Desert Kill, Munchies, Between the Darkness and the Dawn); John Saxon (From Dusk Till Dawn, A Nightmare on Elm Street, Enter the Dragon, Beverly Hills Cop III, A Star is Born, The Bees; won three awards and a nomination for works including The Appaloosa and The Craving Heart; 65 other films and TV projects) and Ray Walston (The Sting, The Apartment, Of Mice and Men, Fast Times at Ridgemont High, Silver Streak; won Best Actor Tony Award for Damn Yankees; won two Emmys for Picket Fences; two other awards and four nominations for works including My Favorite Martian; 45 other films and TV projects).

Producers: Ken Sanders (The Dentist 2, The Stepdaughter, A Table for One) and Martin J. Fischer (Lilith Fair: A Celebration of Women in Music, Farm Aid ’96, Jim Brickman: Love Songs & Lullabies).

Film Editing by Jacquie Freeman Ross (was dubbing supervisor on G.I. Joe and The Transformers: The Movie).