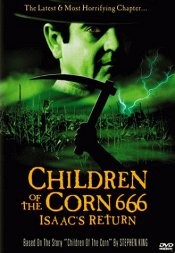 The leader of a group of murderous children brings them back to the cornfield where many were murdered, to fulfill a deadly 15-year-old prophecy.

Writer(s) – John Franklin and Tim Sulka; based on the book by Stephen King.

Synopsis – In the sixth installment of the hugely successful franchise, Hannah drives back to her hometown of Gatlin to find who her mother is. She picks up a strange man who predicts her life story with a bible passage. Fifteen years after the original Children of the Corn, Isaac, leader of the band of murderous children, returns to bring his youthful followers back to the field, in order to fulfill that prophecy.

Critics’ Kudos:
Nathan Rabin of The Onion A.V. Club proclaimed, “It does display an anything-goes irreverence that makes 666 among the best in the series.”

The reviewer for Wooden Spoons called Children of the Corn 666: Isaac’s Return “a good sequel.”

Major Cast and Crew Credits and Awards:
Director is Kari Skogland (Men With Guns, Zebra Loungte; won WorldFest Houston Silver Award for The Size of Watermelons, was nominated for three other awards for that film, two for Traders and one each for The Eleventh Hour and Chicks With Sticks).

Writers are John Franklin and Tim Sulka (who together wrote Grenada-Wars and Panama-Wars); based on the book by Stephen King.

Production Design by Stuart Blatt (Fear of a Black Hat, Tales from the Hood, Payback, The Price of Love).