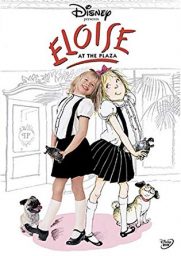 A rambunctious six-year-old girl creates havoc at the stately Plaza hotel, while her nanny and the concierge try to limit the damage.

Synopsis – Eloise (Sofia Vassilieva) is an elegantly rambunctious six-year-old girl who lives at the Plaza hotel in New York and lives to cause trouble for its staff and patrons. She has a long-suffering nanny (Julie Andrews) who spends much of her time attempting to dissuade her charge from getting into hot water; she also has a comic foil in Mr. Salmone (Jeffrey Tambor), the Plaza’s extremely nervous concierge, who clings tenaciously to his hotel’s five-star reputation.

Eloise isn’t above playing God with the guests: not only does she contrive a confrontation between a domineering mother and a sheepish young debutante, but she engineers a reconciliation between a bereaved young prince and his distant father.

She rampages through the Plaza’s halls, flirting with danger but somehow always landing on her feet.

Release Data:
Aired on ABC’s “Wonderful World of Disney,” on Sun. April 27, 2003. It hit Italian and Hungarian theatres in 2004, bowed in Sweden in 2006 and opened in Australia in 2007.Award for Eloise:
Eloise at the Plaza won a “Best Score” Emmy for composer Bruce Broughton.

Critics’ Kudos:
Ann Hodges, Houston Chronicle: “Julie Andrews is marvelous as Eloise’s ‘rawther’ British nanny and lively little Sofia Vassilieva is perfectly cast as Eloise, the precocious 6-year-old who, with her dog Weenie and her turtle Skipperdee, turn New York’s famous five-star hotel into her personal playground. Their Eloise at the Plaza is a new TV embellishment for an old read-it-to-me-again favorite. Kay Thompson’s fanciful book has entertained generations of little girls.”With Kevin Lima (102 Dalmations) as director and a very busy script by Janet Brownell (Gilda Radner: It’s Always Something), this movie manages to tell its own story while still retaining the charm of Thompson’s original creation. The real joy of Eloise is still on the printed pages, but TV’s Eloise at the Plaza makes its own measure of fun without messing too much with that time-honored image.”Travis Mackenzie Hoover, Film Freak Reviews: “Eloise at the Plaza is made with far greater skill and care than a Disney TV-movie would normally warrant. Derived from the much-loved children’s books by Kay Thompson and Hilary Knight, the film goes out of its way to reproduce their junior-New Yorker tone, only in a heavily formalist, hyper-real manner that thrives on perfect shape and well-timed movement. So accomplished is the look of the film that it makes one forget the mealy-mouthed sentiment of some of the dialogue–the clockwork archness of the production transforms its cliches into pure narrative form, so that they might give pleasure in their deployment and execution. In short, it’s much better than it had to be.”People are hurled across rooms and through city streets so as to cause expertly timed mayhem. The various story threads are merely an excuse to get the kinetic ball rolling, so that hugely caricatured people can use their bodies in ways both precise and outrageous for the amusement of a young audience. One doesn’t remember the plot; one remembers the elegant mayhem, in addition to the sweetly thrilling sensation of being mastered by one very strong-willed six-year-old.

“As such, the crew assembled is about as good as a TV-movie can get. Director Kevin Lima has a real technical knack and manages to toss the camera around without giving the sensation of haphazardness. In aid of this are costume designer Christopher Hargadon and production designer Tamara Deverell, who flawlessly reproduce both the look of the storybooks and the 1950s idiom from which they sprang. Going for a glorious artificiality, they accentuate Lima’s formal flourishes and arrive at something resembling the Coen Brothers for tots. And the performances are hilariously apt across the board, from the unnaturally sharp turn of the lead right on down to the supporting players, with Julie Andrews especially distinguishing herself with her governess, who is light years away from the likes of Mary Poppins. The results are unusually satisfying for the studio involved and show that there they haven’t completely stamped out creativity at the Mouse House just yet.”

David Nusair, Reel Film Reviews: “Eloise at the Plaza is entertaining, if only because it seems to consist of one caper after another. Eloise gets into a madcap adventure, adults chase her around, Nanny admonishes her, etc – and the fast pace is clearly in place to keep younger viewers interested. There’s no doubt that the movie will act as wish-fulfillment for kids – who wouldn’t want to run amuck and get away with it?

“There are a number of talented actors in the cast. Jeffrey Tambor as the put-upon manager proves to be a perfect comedic foil for Eloise’s antics. There’s no denying that Eloise at the Plaza is well made.”

UltimateDisney.com: “There may be better Wonderful World of Disney movies than Eloise at the Plaza, but none have been given such great DVD treatment. Featuring first-rate picture and sound, plus a nice offering of supplements, Disney’s DVD release of this mirthful and zippy family film is highly recommended.

“When she’s not trying to get out of French lessons from her snooty tutor, Eloise enjoys setting ahead the hotel clock a few minutes and making noise in the halls. She’s also quite fond of room service, and never hesitates to use her mother’s hotel credit for anything. Through it all, Eloise remains adorably optimistic, inspiring those around her, while making a mess.

“I think most viewers will agree that Eloise at the Plaza is a colorful and well-paced comedy. It avoids sappy moral lessons almost altogether, and yet it possesses a Pollyanna-esque spirit at its center.

“Much praise must go to Sofia Vassilieva, the young star, who does an excellent job at bringing the title character to life. This film adaptation could very easily have added Eloise to the long list of annoying child characters that the movies have given us. Fortunately, the young actress carries the film and delivers both comedy and cuteness. Thanks to Vassileva’s charismatic lead, solid supporting performances, and benign direction from Kevin Lima (Tarzan), Eloise should please fans of the books. Not only that, but the film even ascends beyond the second-tier quality that most television movies are satisfied to achieve. Eloise deserves praise not merely as a more bearable Wonderful World of Disney presentation, but as a genuinely entertaining family film, regardless of format.

“Eloise at the Plaza is presented in a 1.78:1 anamorphic widescreen transfer. This matches the ratio of its High Definition broadcast. Picture quality was just about perfect. The vibrant color palette is wonderfully rendered, and the video is consistently sharp and free of any problems whatsoever. The film is nicely shot, and the transfer is certainly praiseworthy. The film’s image is so vivid and crisp that it seems to leap off the screen.

“The movie is presented in a Dolby Digital 5.1 surround track, which aptly balances Bruce Broughton’s upbeat and elegant score with an abundance of sound effects. When used, the rear speakers do a great job at creating a wide sound environment. For instance, an early scene involving a washing machine is effectively mixed. Dialogue from the front speakers is crisp and always discernible. This is a most pleasing soundtrack and surprisingly active for a telemovie.

“There is a surprisingly satisfying amount of extra features here. First and foremost is ‘From Page to Screen: The Making of Eloise at the Plaza.’ This well-done, 17-minute making-of featurette tackles Thompson’s Eloise books, covering characters added to the film and changes to the text. Illustrator Hilary Knight reflects on how he anticipated an animated film, but feels the result was even better. Also discussed is the finding of the young star Sofia Vassilieva, who, director Lima reveals, is even more like Eloise in real life. The filmmakers also cover their efforts to replicate the book’s artwork in the design of the film. In ‘Hilary Draws Eloise: An Art Lesson’ (3 minutes, 36 seconds), Hilary Knight, the male illustrator of the Eloise books, whose distinct drawings add flavor and faithfulness to the film adaptation, briefly explains how he met author Kay Thompson and how they collaborated on the books. The real focus, though, is about how to draw Eloise. Hilary shows us just how he does that, in a very quick and rudimentary fashion. It’s a short but nice bonus feature. And ‘See The Books’ simply provides the titles and covers of the eight Eloise books on the market.”

Major Cast and Crew Credits and Awards:
Directed by Kevin Lima (won DGA award for Eloise at Christmastime; nominated for an Annie Award for Taraan; directed 102 Dalmatians, A Gooofy Movie and Enchanted).

Writer is Janet Brownell (TV’s Gilda Radner: It’s Always Something, The Amy Fisher Story, Christmas in Connecticut, Angels Fall, The Christmas Tree, Sweet Revenge and Once Upon a Mattress).

Stars Julie Andrews (won Oscar for Mary Poppins; Oscar noms for The Sound of Music and Victor/Victoria; seven Emmy nominations; 12 Golden Globe nominations, winning five for works including for Mary Poppins, Victor/Victoria and The Sound of Music; 18 other awards and four other nominations for works including The Americanization of Emily, The Princess Diaries and Thoroughly Modern Millie; appeared in S.O.B., 10, Torn Curtain, Hawaii, Shrek 2, Shrek the Third, Cinderella, Enchanted, Trail of the Pink Panther, On Golden Pond, Darling Lili and 18 other movies and TV projects); Christine Baranski (seven awards and 10 other nominations for works including Chicago, The Birdcage, Frasier, Cybill and How the Grinch Stole Christmas; performed in Cruel Intentions, Bowfinger, Addams Family Values, Bulworth, Reversal of Fortune, Who’s Minding the Mint, Nine 1/2 Weeks, The Ref, The Guru, Now and Again, Playing for Time and 47 other films and TV projects).

Executive producers: Denise Di Novi (won 1990 Best First Feature Independent Spirit Award for Heathers; nominated for 1997 Golden Satellite Award for James and the Giant Peach; produced Edward Scissorhands, Batman Returns, Ed Wood, Message in a Bottle, Original Sin, What a Girl Wants, The Nightmare Before Christmas, A Walk to Remember, The Sisterhood of the Traveling Pants 1 and 2, Catwoman, Little Women and 17 other movies and TV projects) and Patrick Meehan (Eloise in Paris, Eloise at Christmas, Me Eloise, Rhythm & Blues and Wassup Rockers).

Original score by Bruce Broughton (Oscar nom for Silverado; won eight Emmys and four ASCAP awards for works including Eloise at the Plaza, JAG, Warm Springs, Eloise at Christmastimne, Lost in Space, Glory & Honor, Dallas, Buck Rogers in the 25th Century and O Pioneers; won three other awards and received 12 nominations for works including Young Sherlock Holms, Tiny Toon Adventures, First Monday, True Women, Two Marriages, The Old man and the Sea, Quincy M.E., The Blue and the Gray and Killjoy; also scored Tombstone, So I Married An Axe Murderer, Honey I Blew Up the Kid, Harry and the Hendersons, The Presidio, The Ice Pirates, Logan’s Run, The Rescuers Down Under, 14 episodes of Tiny Toon Adventures, seven episodes of Capitol Critters, four episodes of Amazing Stories, 11 episodes of Dallas, eight episodes of Quincy M.E., seven episodes of Buck Rogers in the 25th Century, five episodes of Hawaii Five-O, four episodes of Gunsmoke and 81 other movies and TV projects).

Cinematography by James Chressanthis (Emmy noms for Four Minutes and Life with Judy Garland: Me and My Shadows; shot Urban Legend, Judas Kiss, Nowhere Man, The Music Man, Hexed, Brian’s Song, The Reagans, Martial Law and 29 episodes of Ghost Whisperer and 25 other movies and TV projects).

Costume Design by Christopher Hargadon (Emmy nom for Once Upon a Mattress; costumed The Pacifier, The Miracle Worker, Mr. Magorium’s Wonder Emporium, The Skulls II, The Russell Girl, 20 episodes of The City and 24 episodes of A Nero Wolfe Mystery).

Links:
Internet Movie Database entry for Eloise at the Plaza

A rave review of the Eloise at the Plaza DVD 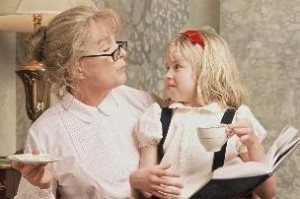 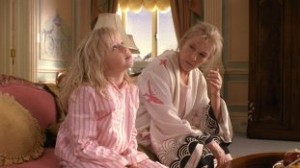 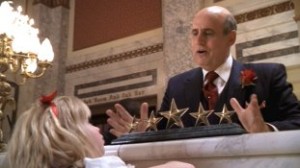 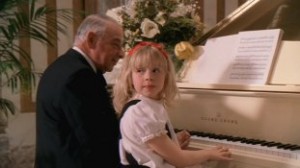 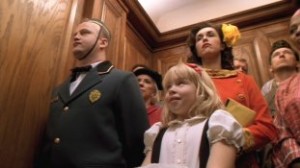 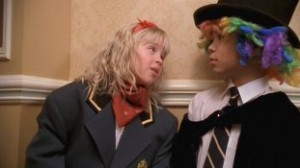 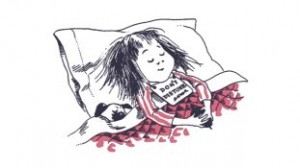