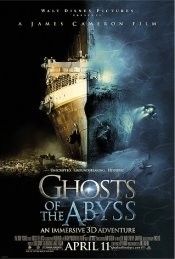 Synopsis – James Cameron (Titanic) journeys back to the site of the legendary wreck of the Titanic. With a team of the world’s foremost historic and marine experts and friend Bill Paxton he embarks on an unscripted adventure back to the final grave where nearly 1,500 souls lost their lives almost a century ago. Using state-of-the-art technology developed expressly for this expedition, Cameron and his crew explore virtually all of the wreckage, inside and out, as never before. With the most advanced 3D photography, moviegoers will experience the ship as if they are part of the crew, right inside the dive subs. In this unprecedented motion picture event, made especially for IMAX 3D Theatres and specially outfitted 35mm 3D theaters across the country, Cameron and his team bring audiences to sights not seen since the sinking 90 years ago and explore why the landmark vessel — more than any shipwreck — continues to intrigue and fascinate the public.

Release data:
In 2003 it was released in the U.S., U.K., France, Australia, Poland, Lithuania, Denmark, Greece, Belgium, Spain and Switzerland. It opened in Germany, Thailand, Singapore, Norway and Finland, as well as on Norwegian and Finnish DVD in 2004. A year later, it bowed in Mexico in the IMAX version. In 2003 it screened at the Cannes and Deauville Film Festivals.

Critics’ Kudos:
Seventy-two of the 87 North American critics who reviewed Ghosts of the Abyss (83%) praised it.

Ty Burr, Boston Globe: “Its a unique trip that grows more compelling, awe-inspiring and tragic the deeper you go.”

Kirk Honeycutt, The Hollywood Reporter: “The footage of the old ship, whose ghostly grandeur is still apparent, despite 90 years underwater, speaks volumes.”

Daphne Gordon, Toronto Star: “The footage from the dives shows perfectly preserved details from the inside of the ship.”

Steve Murray, Atlanta Journal-Constitution: “The next best thing to riding a sub to the bottom of the North Atlantic and prowling around the sunken ocean liner.”

Elizabeth Weitzman, New York Daily News: “One of the rare IMAX movies in which the 3-D effects are completely melded into the picture rather than simply used as a gimmick.”

Jeff Shannon, Amazon.com review of the DVD: “Even without its original 3-D IMAX presentation, James Cameron’s Ghosts of the Abyss is still an eerily elegant tour of history’s most infamous shipwreck. Six years after his original journey to the rusting hulk of the Titanic (where he captured footage for his 1997 blockbuster), Cameron returned to the wreckage with actor Bill Paxton, a team of Russian and American scientists, the world’s most knowledgeable Titanic historians and enough state-of-the-art technology to film the most complete and intimate exploration of the ill-fated ship’s remains. Astonishing footage, flawless digital animation, and ghostly re-creations of the ship’s final hours are seamlessly combined to orient the viewer at an intersection of tragic past and awe-inspiring present, emphasizing more than ever the sheer scale of Titanic’s gargantuan construction. Signs of luxury remain 90 years later, while the terrorist attacks of September 11, 2001 (occurring here in mid-mission) place this unforgettable journey into resonant, humanitarian perspective.”

Producer-director Quote:
James Cameron: “The visibility we got down at Titanic sometimes dropped down to about 50 feet, but usually up around the 100-, 125-foot mark. The limitation at the Titanic wreck is lighting, just pounding enough light onto the ship to be able to see it. The ship is orange, and orange light is the second wavelength (after red) that you lose coming through water. So you put a white light on an orange subject 100 feet away, and 80% of the light is absorbed before it reaches you, because it’s only reflecting in the red end of the spectrum. All the blues are not reflected, so you’ve just lost most of the effect or your light. It’s a tough subject. The Bismark [referring to his Discovery Channel documentary Expedition: Bismark] was much easier, because it was gray, so it reflected the full spectrum.”
Links:
Internet Movie Database entry for Ghosts of the Abyss

Interview with actor/diver Bill Paxton about Ghosts of the Abyss–at IGN.com 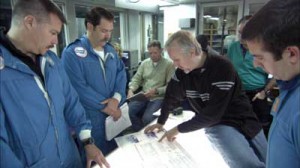 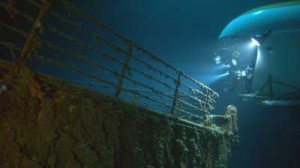 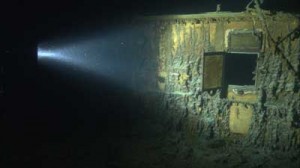 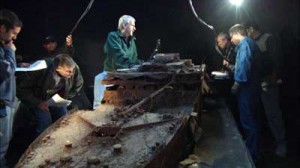 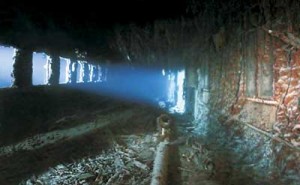