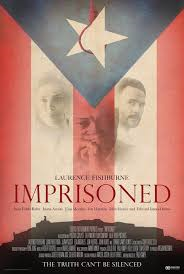 Prison Warden Daniel Calvin seeks revenge on fisherman/ex-on Dylan Burke, who caused his wife’s death 25 years ago, and seeks to set him up for murder.

Synopsis – Dylan Burke has made many mistakes in his former life as a small-time criminal, but he put his dark past behind him when he found the love of his life, Maria. Dylan now works as an open water fisherman, while Maria runs a quaint seaport coffee shop. It is the idyllic life they both never dreamed they’d achieve. But when the local prison warden, Daniel Calvin, realizes Dylan is the man who caused his wife’s death twenty-five years ago he’ll stop at nothing to have his rightful revenge, including framing Dylan for murder and having him locked away under the warden’s charge. Laurence Fishburne, Edward James Olmos, Esai Morales, John Heard, Jon Huertas and Juan Pablo Raba star in the indie thriller Imprisoned, filmed in Puerto Rico with Walter Josten executive producing, along with Greg Schenz, Tannaz Anisi and Holly Levow. Luillo Ruiz of Pimiento Film Co. is a producer of the film.

Paul Kampf Kampf (Best Fake Friends) is a producer and directing from his own script, described as a revenge thriller wrapped around a love story with the question of the sacrifices made for love.

People, their major credits and awards

Writer/director/producer: Paul Kampf (Best Fake Friends, Amnesia:Who Are You? and Brothers Three: An American Gothic). Executive Producers: Walter Josten on Emmy for Around The World In 80 Days, Holes, The Incredible Mrs. Ritchie, Rescue Dawn, I Could Never Be Your Woman, An Uncommon Kindness: The Father Damien Story, Shergar, Keith, Flawless, over 140+ projects in total, Tannaz Anisi (Voice from the Stone, Manhattan Night and 3 more films), Holly Levow (Best Fake Friends and Ordinary Angels) and Greg Schenz (Freeheld, Dead Within, Jane Millen and 4 more films). Producer: Luillo Ruiz (nominated for a Grammy award; produced 20 films including Men Who Stare at Goats, The Caller, Welcome to the Jungle, The Farm and In the Blood; he and Walter Josten produced Ana, Speed Kills and Drive). Actors: Laurence Fishburne: (has won 23 major awards and has earned 54 nominations] including Oscar for What’s Love Got to do With It]. He has been honored for Roots, The Tuskegee Airmen, Thurgood, The Matrix, Mystic River, Hoodlum, Bobby, Black-ish and Othello. He has 97 other film and TV credits. Edward James Olmos has earned 23 awards and 27 noms for works such as Stand and Deliver (Oscar nom), Miami Vice, Dexter, Battlestar Galactica and Selena; he has 104 more Credits. John Heard’s 179 credits include The Sopranos (Emmy nom), Tender is the Night (CableACE nom), Home Alone, Big and Awakenings. Esai Morales has 3 wins and 7 noms for such as NYPD Blue, Jericho, The Disappearance of Garcia Lorca and Gun Hill Road. Juan Palo Raba, Jon Huertas, Juana Acosta and Fernanda Urrejola have also won awards.