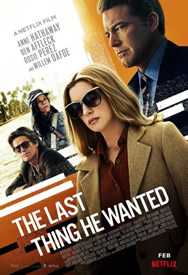 When a corporation comes to a Southern town to bulldoze an historic African American neighborhood, there is a confrontation between a former sheriff with past sins and an ex-civil rights worker whose brother was murdered 40 years before.

Synopsis – A veteran D.C. journalist loses the thread of her own narrative when a guilt-propelled errand for her father thrusts her from byline to unwitting subject in the very story she’s trying to break. Adapted from Joan Didion’s namesake novel. THE LAST THING HE WANTED is a Netflix film that Walter Josten executive produced. It stars Anne Hathaway, Willem Dafoe, Ben Affleck, and Rosie Perez and was produced by Cassian Elwes, and directed and co-written by Dee Rees, who helmed (MUDBOUND). Based on a Joan Didion novel, it’s the tale of a woman who becomes an arms dealer. It was filmed summer of 2018 in Puerto Rico and will be released soon. Marco Villalobos co-scripts.

Keanu Reeves, Garcia and Travolta have been especially instrumental in raising funds for Puerto Rico. Six months after the hurricanes, which killed 60 people, 16% of the island, 200,000 homes and businesses, still lack electricity. This is the worst storm to hit Puerto Rico in 89 years. Links: Internet Movie Database page