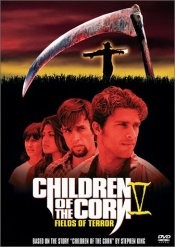 In the fifth installment of the hugely successful franchise a young woman who tries to rescue her estranged teenage brother from the clutches of a mysterious cult of children must face the wrath of its charismatic leader.

Writer(s) – Ethan Wiley ; based on the book by Stephen King.

Synopsis – Six college students take a wrong turn and find themselves lost in a strangely deserted rural town, only to discover that this deceptively quiet place hides a murderous cult of children controlled by evil forces. Yet even as bodies begin cropping up all around them, the young friends decide to stay and rescue the children–or die trying!

Critics’ Kudos:
Jarret Friend, Horrorwatch: “This crop of the Children of the Corn is more brutal than ever. The actions and brutality of the followers of the Corn God alone are worth the rent of this one. There is one truly tasty highlight: Eva Mendes plays Kir, a totally hot bitch who is totally a bitch, but damn is she fine. This movie is stronger than the other sequels.”

Guy McPherson, Apollo Guide Review: “If you have seen the first four, go for it. After all, it is the newest and most shocking chapter. David Carradine plays the David Koresh-like leader of a cult of children. We learn that children are born innocent and are only corrupted by adults. Fair enough. But I don’t see the necessity of all the killing. Can’t we all just get along?

“There is a really nice performance by Stacy Galina. She has a kind of Kate Jackson-circa- Charlie’s Angels aura about her. She is the smart one (and the best actor) of the four that get caught up with the children.”

Writer is Ethan Wiley (House, House II: The Second Story, Deadwater); based on the book by Stephen King.

Stars Stacy Galina (Big Man on Campus, Knots Landing); Alexis Arquette (Pulp Fiction, She’s All That, The Wedding Singer, Of Mice and Men, Spun, Bride of Chucky, The Trip, Lords of Dogtown; won a 1997 best actor award for Never Met Picasso); Eva Mendes (Once Upon a Time in Mexico, Ghost Rider, Stuck on You, A Night at the Roxbury; nominated for five awards for Hitch, 2 Fast 2 Furious and Training Day); Greg Vaughan (Poison Ivy: The New Seduction, Charmed, Stuart Bliss; Soap Opera Digest Award nom for The Young and the Restless) and Angela Jones (Pulp Fiction, Man on the Moon, Curdled, Pariah).

Cinematography by David Lewis (Leprechaun 4: In Space, Leprechaun 3, Night of the Demons 2, Betrayal of the Dove, The Set Up, Shergar).