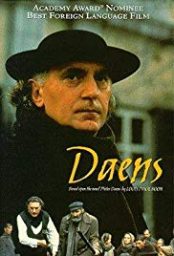 Synopsis – In the 1890s, Father Adolf Daens went to Aalst, Flanders, a textile town where child labor was rife, pay and working conditions were horrible, the poor had no vote and the Catholic church backed the middle class in oppressing workers. He wrote a few columns for the Catholic paper, and soon workers were listening, and the powerful were in an uproar. Daens was expelled from the Catholic Party, so he started the Christian Democrats and was elected to Parliament. After Rome disciplined him, Father Daens had to choose between remaining a priest or remaining a champion of workers.

In subplots, a courageous young woman fells in love with a socialist and survives a shop foreman’s rape, children die and prelates play billiards.

Channel 4 (U.K.)film review: “Coninx’s portrait of Father Adolf Daens and his actions, which started with a few simple columns for the local Catholic newspaper and culminated in the founding of the Christian Democrat Party, after Daens had been expelled from the church, is a powerful exploration of how one man can make a difference to society. Fascinating.”

Through March 2007, Daens got the highest viewer ratings of all the 105 films Blue Rider has produced, financed and/or distributed.

Costume Design by Yan Tax (Spetters, Amsterdamned; nominated for a Tony Award for Best Costume Designer on Cyrano: The Musical).

Festival Screenings and Release Data:
Daens screened at the 1993 Toronto Film Festival and at the 2000 Febio Film Festival in the Czech Republic. It played in The Netherlands in 1993, France in 1994 and Denmark in 1995.