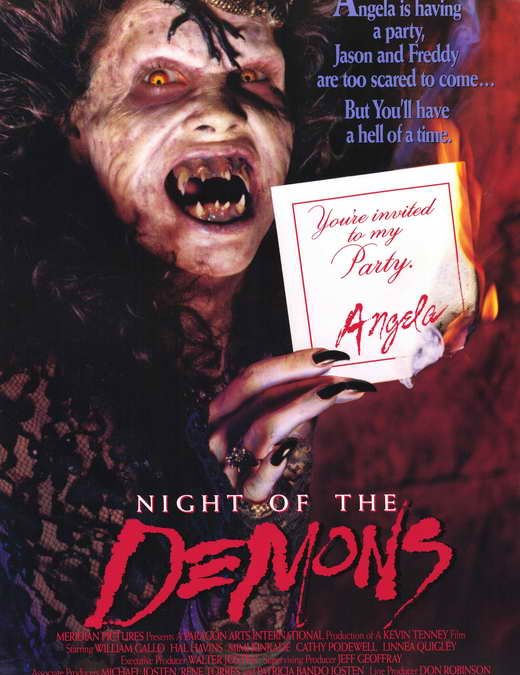 On Halloween night a group of teenagers break into an abandoned funeral parlor to have a party and wind up raising hell-literally.

Synopsis – On the night of Halloween, 10 teens decide to go to a party at an abandoned funeral parlor, formerly the home of a mass murderer and rumored to be built on an evil patch of land. While starting the party, the teens gather around a big mirror to perform a seance, but they awaken some evil force and find themselves trapped and taken over, one by one. Now it’s a battle for who can survive and cross over the underground stream beneath the structure, before going to hell.

Critics Blurbs
“Dexterous, savvy and in some ways ahead of its, “Night of the Demons” is a teenage possession flick that also works as stylish slasher fodder and as a guide to Halloween myths and traditions. Director Kevin Tenney (1986’s “Witchboard”) displays impressive ambition in creating a definite mood and identity to the piece What his few unpolished actors occasionally lack in thespian prowess, Tenney and screenwriter Joe Augustyn make up for with a barrage of imaginative ideas and tight pacing that lift the film well above the norm.
“Night of the Demons” doesn’t have anything of importance to say and offers no deep messages. Instead, it’s got violence, sex, nudity and a good-humored script. There are all different types of genre films, and this one was purely made to entertain. Its technical and creative ingenuity is but a plus on the scorecard, and its wraparound sequence, involving a grouchy old man who has the tables turned on him when he slips razorblades in the trick-or-treaters’ apples, is a bewitchingly grim capper. “Night of the Demons is practically dripping with the blood, sweat and tears of those who set out to make a genuinely good party movie, and did exactly that.”
–Dudtin Putman,
The Film File

“Night of the Demons, released in 1988, is the kind of horror film that doesn’t get made a lot these days. In the ’80s, many fright flicks had a sly sense of humor running underneath the gore and terror. They were fun, and their goal was to give you that unique, dual giggle/gross-out sensation. Directed by Kevin S. Tenney (Witchboard), Night of the Demons is perhaps even more perversely humorous than most of the era, and it’s certainly more perversely gruesome.
Night of the Demons has a wicked, tongue-in-cheek sense of humor. One has to marvel at the creativity of the shock scenes, which often start off comically, only to abruptly go to some unabashedly freaky places.
There’s some subtle spoofing of both high school cliques and horror movie conventions in Night of the Demons, too. The screenplay, by Joe Augustyn, has fun imagining what would happen if the goth kids, the jocks/cheerleaders, and the geeks all got together in the same place where a horrific situation was taking place. It even subverts your expectations, based on fright film logic, as to which characters will die and in what order.

Director Kevin Tenney composes shots and moves his camera in inventive, ambitious ways that give the film a distinctly off-kilter feel. There’s an amazing shot in which we see all the characters, each reflected in his or her individual shard of a broken mirror, whose pieces rest on the floor. The way Tenney films the possessed Angela floating down a hallway – filmed from ground level as she hovers over the camera – is very creative, as well. The attention to creating unsettling visuals is impressive. Had Tenney ever made a film that became a genuine box office smash, he might have gone on to have the kind of career Sam Raimi has. He is clearly an underrated horror auteur.

No one is going to mistake Night of the Demons for an all-time classic. But is it a blast? You bet it is! Gross, funny, and full of superb makeup effects, this is a ghoulish treat for fans of the severely demented.”
–Mike McGranaghan, The Aisle Seat

Writer: Joe Augustyn penned Night of the Demons 2, Night Angel and 2 other scripts.

Actors: Linnea Quigley (won best horror actress at the Underground Monster Carnival and a best supporting actress nom at the 2014 Scare-a-Con Film Festival, both for They Came From th Ether; her 143 credits include Hooker with a Hacksaw, Creepazoids, Nightmare on Elm Street 4, Girls Gone Dead and Silent Night, Deadly Night), Hal Havins has 38 credits including Your Pretty Face is Going to Hell, Sorority Babes in the Slimeball Bowl-a-Rama and Parks and Recreation) and Amelia Kinkade (inducted into the Horror Movie Hall of Fame in 2016 as the first female movie monster; in addition to starring in the Night of the Demons trilogy, she also appeared in 12 other shows, such as Knight Rider, Misfits of Science and The Golden Girls).

Executive Producer: Walter Josten: (won Emmy for The Incredible Mrs.Ritchie; 62 other producer credits including Witchboard, Night of the Demons 2 and 3, Leprechaun 3 and 4, Wishmaster IV, Holes, Around the World in 80 Days, Red Squad, Imprisoned, Replicas, Cigarette, Ana, Driven and Zander.

Cinematography: David Lewis earned 3 Emmy nominations for Pee-wee’s Playhouse; shot 42 other projects including UHF, Chairman of the Board, Children of the Corn V, Shergar and Killer Bud.

Makeup Effects Designer and Creator: Steve Johnson won Emmys for The Snining and The Stand; won 3 major awards for Species and Blade II; 7 more awards for Species, Freaked, Highway to Hell, The Outer Limits and The Cat in the Hat.

Animated Title Creator: Kathy Zielinski won student academy award for animation and was nominated for Annie award for The Hunchback of Notre Dame; her 30 credits include Frozen, Aladdin, Kung Fu Panda and The Simpsons.

Links:
Internet Movie Database entry for Night of the Demons

A Night of the Demons Fan Site

Another Night of the Demons Fan Site 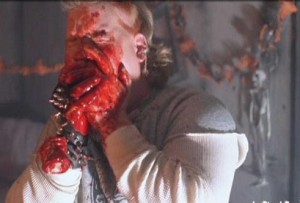