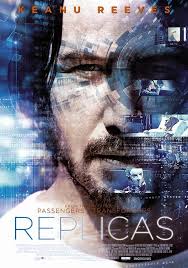 A scientist becomes obsessed with bringing back his family members who died in a traffic accident.

Synopsis – A daring synthetic biologist who, after a car accident kills his family, will stop at nothing to bring them back, even if it means pitting himself against a government-controlled laboratory, a police task force, and the physical laws of science.

Keanu Reeves, Garcia and Travolta have been especially instrumental in raising funds for Puerto Rico. Six months after the hurricanes, which killed 60 people, 16% of the island, 200,000 homes and businesses,still lack electricity. This is the worst storm to hit Puerto Rico in 89 years. Director: Jeffrey Nachmanoff nominated best direction in a drama series, Online Film & TV Assn. for Homeland and won Hamptons Film Festival audience award Best short for The Big Gig; 10 other director credits including Detroit 1-8-7, Meet Jane Hollywood Palms and an episode of Chicago Fire. Writers: Stephen Hamel (5 writer credits include Siberia, Rally Car and Henry’s Crime) and Chad St. John (London Has Fallen). Actors: Keanu Reeves (12 wins and 15 noms for such films as The Matrix, Speed and A Walk in the Clouds; his 88 other film and TV projects include Bill & Ted’s Excellent Adventures, John Wick, 47 Ronin and The Devil’s Advocate), Alice Eve (her 36 credits include Men in Black 3, She’s Out of My League and Star Trek Into Darkness) and Thomas Middleditch (his 8 nominations are for Silicon Valley and Penn Zero: Part-time Hero; has also appeared in The Wolf of Wall St., The Campaign, Kong: Skull Island and 62 other projects). Executive producers: Walter Josten (won Emmy for The Incredible Mrs. Ritchie; his 61 other producer credits include Imprisoned, Ana, Cigarette, Red Squad, Holes, Night of the Demons, Then She Found Me, The Flock, O Jerusalem, Rescue Dawn and Survival Island), Nik Bower (has produced 9 films such as Selma, Suffragette, Genius and Show Dogs), James Dodson (his 12 producer credits include Chronicle, Catch the Kid and Sunset Strip), Erik Howsam (produced Shooter, Four Brothers, Only the Brave and 5 other films), Bill Johnson (his 32 producer credits include A Hologram for the King, TheGrey, Killing Them Softly and The Killer Elite), Ara Keshishian (November Criminals, Z for Zachariah, Kidnap and 3 more producer credits), Deepak Nayar (2 wins for Buena Vista Social Club and Second Chances and 4 noms for Buena Vista, Bend it Like Beckham and Willie Nelson at the Teatro; his other 48 producer credits include Genius, Lost Highway, Dredd and Bride & Prejudice), Gregory Ouanhon (has produced Nine Lives, The Transporter Refueled, Hummingbird and 6 other films), Clark Peterson won an Independent Spirit award for Monster; his 31 other producer credits include Rampart, Devil’s Knot and Wishmaster), Maxime Remillard (won a Genie award for Polytechnique and a Jutra nomination for Elles etaient cinq; his 12 her producer credits include Battle in Seattle, Mesrine Part 2: Public Enemy #1 and Ideal Home) and Jim Siebel’s 31 credits include Bug, Just Friends and Peaceful Warrior). Producers: Lorenzo di Bonaventura (2 noms for Four Brothers; his 45 other producer credits include Transformers, 148 and Man on a Ledge), Keanu Reeve (14 producer credits such as Green Dolphin, Side by Side and Knock Knock), Mark Gao (produced The Blood Bond, The Precipice Game, Super Express and 12 other films), Stephen Hamel (produced Unmanned, Passsengers and 4 other films) and Luis A. Riefkohl (Cigarette, Welcome to the Jungle). Cinematographer: Checco Varese won 2 Argentinean awards for El Aura and a Cameraimage nomination for The 33; he has shot 48 projects including Prom Night, Miracles from Heaven, True Blood and Melrose Place.