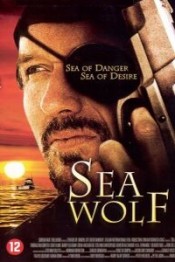 A rebellious ex-sailor is hired by a mysterious woman to find Montezuma’s sunken treasure – but the quest is very dangerous.

Synopsis – Jeffrey Thorpe (Thomas Ian Griffith), booted out of the Navy for disobeying orders, sails his ship The Sea Wolf around the Caribbean, taking any job, no matter how suspicious. The alluring and mysterious Helena (Gerit Kling) shows him an unusual gold coin and earns his pledge to seek Montezuma’s sunken treasure. However this turns into his most dangerous and unpredictable mission.

Release Data:
Released on Hungarian TV in 2005 and on Spanish and Finnish DVD in Spring of 2006. It was also seen it the U.S., Canada, Italy and Denmark.

Critic’s Kudos:
Ryan Cracknell, Apollo Movie Guide: “What director Mark Roper has made is cheesy fun. It’s nice to see an update of the swashbuckling genre, even if it is in jest. I enjoyed Sea Wolf in all it’s campy splendour.”