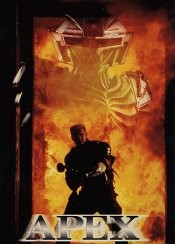 A time-travel experiment goes terribly wrong, thrusting one of the project scientists, Nicholas Sinclair, into an alternate timeline. Sinclair must find a similar time machine in this alternate world.

Synopsis – A probe from the year 2073, an Advanced Prototype Extermination unit, lands in the wrong area in 1973 and alters life thereafter. A scientist seeks to find it. When he returns to the future, mankind is being destroyed by disease and hunted down by A.P.E.X. killer robots–and the woman who was once his wife is now a hardened, embittered guerrilla fighter who barely knows him.

Critics’ Kudos:
Dragan Antulov, Rec. Arts Movie Reviews: “A.P.E.X. is actually one of those very rare instances when low budget, time travel and homicidal robots don’t produce a bad piece of cinema. A.P.E.X. looks a masterpiece compared with similar films. This is mostly due to rather cerebral approach to the problem of time travel and its consequences, including the time paradox, which is usually absent in most other examples of this popular sub-genre. In A.P.E.X. the time paradox not only exists but it is the cause of all trouble and it must be dealt with.

“The more intellectual approach can be also seen in movie’s protagonist, who happens to be a scientist instead of an action hero. His character, as well as many others, is fleshed out nicely and played by relatively unknown but truly competent actors. Like in all classic films by James Cameron, action scenes are intertwined with character exposure, and as a result the viewers tend to care what happens to the protagonists.

“A.P.E.X. is surprisingly good even on the technical side. The lack of budget is compensated for with good use of locations and CGI. The end result is still the intelligent, entertaining piece.”

Richard Scheib, Moria (The Science Fiction, Fantasy and Horror Film Review): “Among the tiresome run of virtually interchangeable B-budget, direct-to-video clones of The Terminator, this is one of the few to exercise something in the way of imagination. Its time paradox storyline is very well done, definitely holds the interest and adds a whole different level that the usual 1990s SF action film never reaches. The time paradox storyline is quite well done. And the characterization is better than average.

“There are some effective moments, particularly during the scenes when the hero suddenly has to step into an existence he has neverknown before – discovering for the first time the details of a life as he enters his room, searching out his wife but finding her quite a different person to the one he knew in his timeline.”

Doug Pratt, Laserdisc Review: “The complicated and interesting sci-fi action film, about the havoc caused by a time travel paradox, is entertaining. The movie gives your intellect a good run for its money. There are a few clever plot turns, but the budget doesn’t allow the filmmakers to get too carried away, and viewers will have to be satisfied with the balance between elaborate ideas and inexpensive action that the film achieves.

“The picture looks okay, with reasonably accurate flesh tones and no significant distortion. In the stereo surround sound, the separations are active, and the audio is always fairly busy.”

Viewers’ Ratings:
According to polling at the Internet Movie Database, females like this movie more than males do.

Film Editing by Daniel Lawrence (Brothel, They Would Love You in France, Space Marines).

Production Design by Grant Fausey (debut) and
Blake B. Jackson (The Courage to Care).

Visual Effects by Tim Douglas (For the Cause, Allied Forces).