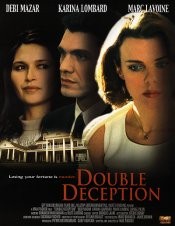 Synopsis – A policeman, hired to guard the daughter of a powerful Japanese businessman, Ozaki, stumbles into a world of deception and crime. Without the bodyguard’s knowledge, Ozaki hires a double named Maria to impersonate his daughter on a business trip to the U.S. A gang of thugs kidnaps her, but since she is not his real daugher, Ozaki refuses to pay ransom. Campbell sets out to do whatever is necessary to rescue Maria, even if it means kidnapping the real daughter.

Critics’ Kudos:
Ryan Cracknell, Apollo Movie Guide: “Ah, the double cross. If you’re a filmmaker looking to spice up your movie with a twist, the double cross is a popular choice. Make the good guy bad or the bad guy good. That’ll get the viewers to pay attention. Or better still, give the perception of the double cross but don’t follow through. That’ll really get them thinking.

“Luke Campbell (Louis Mandylor) is a bodyguard hired by a wealthy Japanese businessman to guard his daughter Lisa Osaki (Rei Kikukawa) from potential kidnappers. One day, while slacking off, the girl in the back of Luke’s car that is supposed to be Lisa is spirited away by kidnappers. But guess what? It’s not Lisa, but rather a girl posing as Lisa. Mr. Osaki feels no obligation to pay the ransom and now the stand-in appears to be the casualty. Determined not to see an innocent die, Luke does what he needs to do to have the stand-in freed.”

Major Cast and Crew Credits and Awards):
Directed by Shundo Ohkawa (Nobody, The Yakuza Way).

Costume Design by Tim Neuman (Venus on the Half Shell, Space Oddity, On the Edge, Shadow Fury and Down ‘n Dirty).

Special Effects by Carol McCarthy (Kill Me Again) and Kevin McCarthy (Murder in the First, Demonic Toys, Fear of a Black Hat, Scenes from the Class Struggle in Beverly Hills, Fast Money, Hobgoblins, Phantasm III: Lord of the Dead, Where the Day Takes You, 3 Ninjas Knuckle Up, Attack of the 60 Foot Centerfold, five episodes of The Chronicle and 40 other films and TV projects).