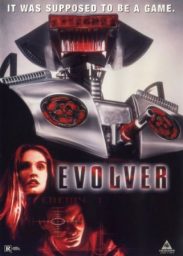 Science Fiction meets reality when a merciless robot turns a video game into a deadly hunt.

Synopsis – A popular virtual-reality video game, Evolver, is brought to real life after Kyle hacks into the Cyber-Tronix mainframe and changes the results to ensure he is the winner. He then gets the opportunity to play against a little robot version of the arcade game, when the shooting robot arrives at his family home. However, Evolver is programmed to evolve greater and greater intelligence, eventually learning to use deadly force to be victorious, so the match between Kyle and Evolver gradually becomes a frantic struggle for survival.

Critics’ Kudos:
Chris Hartley, Video Graveyard: “Evolver is a fun piece of cheese that exhibits a surprising level of competence in its direction–competence rarely seen in Sci-Fi Channel movies, which have a reputation for being low-budget disasters.

“The movie attempts to make the idea of the Evolver robot believable–an attempt that works quite well. The robot exists to play a game that is essentially laser tag, with the human participants using laser guns to shoot at targets on Evolver’s chest while Evolver himself shoots Nerf balls at the players. The movie’s creators understand what the look and feel of the robot should be, and were completely successful in creating a functioning robot that looks and acts like something you could purchase in a Radio Shack.

“While the material is presented somewhat intelligently, it doesn’t take itself too seriously, and it gives in to the corny fun that is the very soul of its premise. Imagine a scene where Evolver drops a car on one of his victims before menacingly saying ‘Game over,’ and you understand the level of entertainment this movie succeeds at providing.

“The movie has some decent performances, and none of the actors embarrass themselves or the movie during any point of the running. This is a small wonder, especially given the silliness factor that the actors have to carry on their backs. John de Lancie, who you may recognize as ‘Q’ from Star Trek: The Next Generation, especially does a good job as Russell Bennett, the obsessive designer of Evolver.

“Of course, the Evolver robot itself is the star of this movie, with much credit due to the people who designed and built it. Some due credit must also be given to William H. Macy for giving Evolver his charmingly robotic voice.”

Chris Notte, Jeff’s Robots: “Evolver was originally billed as a Sci-Fi Channel original movie, but that was the edited-for-cable version. The uncut version includes some minor profanity and brief nudity, but on the whole is a fairly well done film. Acting credits in the film include Fargo’s William H. Macy who provides the voice of Evolver, as well as John de Lancie (“Q” from Star Trek) as the maniacal creator of Evolver who we find out used deadly military technology to develop the robot’s intelligence. All of these ingredients can mean only one thing: disaster. Overall, Evolver is an enjoyable film, if one is willing to suspend disbelief a little beyond the norm. The acting is good and the robot is impressive, with realistic and plausible mechanics, except of course for its intelligence chip. I left the movie asking ‘Where can I get one?’ Too bad they don’t sell them on e-Bay!”

Written by Mark Rosman (The House on Sorority Row, Dead in a Heartbeat, The Blue Yonder).

Executive Producer: Mark Amin (Frida, Eve’s Bayou, Kicking and Screaming, Leprechaun 3, Chairman of the Board and 59 other films and TV projects).

Cinematography by Jacques Haitkin (A Nightmare on Elm Street I and II, Wishmaster, Mom and Dad Save the World, The Hidden, St. Helen’s and 54 other films and TV projects).

Special Robot Effects: Steve Johnson (Spider-Man 2, Predator, The Abyss, Species II, Leviathan; The Howling II-VI; won Emmys for The Shining and The Stand; won two other awards and six other nominations for works including Species, Highway to Hell, The Outer Limits and The Cat in the Hat).

Release Data:
Evolver aired and the Sci-Fi Channel and was released on Laserdisc in 1995.