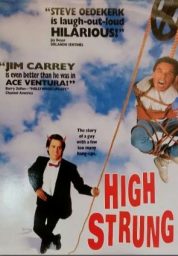 A cynical children’s book writer who spends his days ranting about things that irritate him is further harassed by the appearance of Death, who promises that something big will happen at eight o’clock that evening.

Synopsis – Children’s book author Thane Fellows (Steve Oedekerk) is beset by a dominating mother, a neighbor who continually blasts loud music and an insurance salesman (Fred Willard) who perpetually pesters him. His career collapses and he begins getting strange phone calls, letters and voices in his head from a mysterious person who predicts his doom.

Critic’s Kudos:
Doug Pratt, Laserdisc Review: “Steve Oedekerk stars in the film, which has primarily one set and is essentially a 93 minute comic monolog. To punctuate the narrative, various characters turn up at his door, including an insurance salesman (Fred Willard) and the boss’ wife(Denise Crosby). Jim Carrey appears for about five minutes at the end, as Death, and while all too brief, his sequence is the highlight of the film.”

Major Cast and Crew Credits and Awards:
Directed by Roger Nygard (Trekkies 2, Monsters, Back to Back, The Office; won two awards for Suckers and a Best Documentary nomination for Trekkies).

Stars Steve Oedekerk (Thumb Wars: The Phantom Cuticle, The Godthumb, Thumbtanic, The Blair Thumb, Bat Thumb, Frankenthumb); Tom Wilson (Back to the Future, Back to the Future: Part II, The SpongeBob SquarePants Movie, Larry the Cable Guy: Health Inspector, Action Jackson; won 1991 Best Supporting Actor Saturn Award for Back to the Future: Part III); Kirsten Dunst (Eternal Sunshine of the Spotless Mind, Wag the Dog, Marie Antoinette, Drop Dead Gorgeous; nominated for a 1985 Golden Globe for Interview With The Vampire; 14 other awards and 22 other noms for works including Spider-Man, Jumanji, Bring it On, Little Women, Spider-Man 2, Mona Lisa Smile, The Virgin Suicides and The Cat’s Meow; 30 other films and TV projects); Fred Willard (Austin Powers: The Spy Who Shagged Me, This is Spinal Tap, Anchorman: The Legend of Ron Burgundy, Harold & Kumar Go to White Castle, The Wedding Planner, Waiting for Guffman, Church Ball; three Emmy nominations for Everybody Loves Raymond; three awards and two other noms for works including Best in Show, A Mighty Wind and For Your Consideration; 56 other films and TV projects) and Denise Crosby (Jackie Brown, Star Trek: The Next Generation, 48 Hrs., Pet Sematary, 10, Trail of the Pink Panther, Skin Deep and 45 other films and TV projects).

Costume Design by Susan Watanabe (costumer debut; wrote episodes of Girlfriends and One on One).

Memorable Line:
“I was in Las Vegas, don’t ask why, when I got pulled over by a cop for making a right-hand turn on a red light. Prostitution is legal in Las Vegas, but I made the terrible mistake of doing a right-hand turn on a red light. I could’ve been having sex, on the hood of the car, in the middle of the intersection–no problem. I could probably avoid the ticket by telling the cop I was a pimp and was out for a late-night collection, but then she would’ve asked to see my hat and I would’ve been in trouble.”