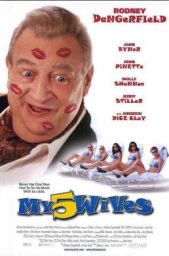 An irrepressible multimillionaire buys a piece of land in the midst of a polygamous religious society and finds that he must marry the quintet of women that come with it.

Critics’ Kudos:
Brian Webster, Apollo Movie Guide: “Every scene is a set-up for Dangerfield’s jokes. The sex humour never ends. The Mormon religion is never mentioned by name, although it’s the butt of many of the movie’s jokes. Dangerfield’s shtick is to play an obnoxious and lowbrow guy who’s willing to put himself down, and thereby becomes strangely likeable. If the bad jokes don’t get to you, the glimpses you get of Dangerfield in a thong bathing suit and as a stripper are bound to.”

Nathan Rabin, A.V. Club: “Dangerfield stars in My 5 Wives, playing a character whose life so eerily paralles that of the Caddyshack star that huge chunks of the dialogue seem drawn directly from his stand-up routine. He learns that several wives are included with the property [he purchases]. He discovers that all his wives are buxom, nubile sex addicts who can’t get enough of the obese real-estate tycoon. My 5 Wives has all the elements necessary for a guilty pleasure of the highest order.”

Producers: Rodney Dangerfield (Meet Wally Sparks, Rover Dangerfield); John A. Curtis (A Twist of Faith, The Operative, Chained Heat II, Ripper 2: Letter from Within) and Pieter Kroonenberg (The Hotel New Hampshire, Cord, Bleeders, Wild Thing; won 1994 CableACE Award for The Sound and the Silence; nominations for Bethune: The Making of a Hero and To Walk With Lions).

Cinematography by Curtis Petersen (Wishmaster 3: Beyond the Gates of Hell, Ski School, Crime Spree and Abraxas, Guardian of the Universe).

Production Design by Graeme Murray (The Fog, Elektra, Harsh Realm; won two Emmys for The X- Files and a Leo Award for Voyage of the Unicorn; three nominations for works including The Odyssey).

Art Direction by Greg Loewen (Harsh Realm, Mercy Point; won Emmy for The X-Files and a Gemini Award nom for Voyage of the Unicorn).

Star Quote:
Rodney Dangerfield: “Monte’s just a guy who can’t resist getting married, that’s all. “I actually have nine wives in the movie, but only five at one time. Let’s put it this way: they all can’t have a headache. I got the idea for the film seven years ago and started writing it; then Harry Basil joined me and we wrote it together.”

Co-Star Quote:
John Byner: “I play the heavy, who wants to foreclose on the entire town. It’s fun and interesting, and a first for me: my first bad guy.”

Quote From a Canadian Comic Actor:
Fred Keating: “Rodney has always been one of my heroes, and to be cast as his buddy was a dream come true for me. It was a thrill to stand there and have the great Rodney Dangerfield turn to me and ask,’What do you think?’ He’d play around with the business in the scene until we felt good about it.”

Factoid:
Dangerfield’s Back to School was the first comedy ever to gross over $100 million.

Filming took place in late spring 1999, in and around Vancouver, British Columbia, Canada.

Trailers for My 5 Wives (in Quicktime and WMP formats)