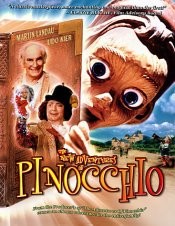 Puppeteer Geppetto becomes a puppet after drinking an elixer that Pinocchio bought from a traveling carnival.

Synopsis – Pinocchio skips school with his friend Lampwick to attend a magical carnival run by Madame Flambeau. She tricks Pinocchio into buying a magic potion which she claims cures any illness. The purchase locks the puppet boy into a contract from which he cannot escape.

Major Cast and Crew Credits and Awards:
Directed by Michael Anderson (Orca, The Shoes of the Fisherman, The Quiller Memorandum, The Sea Wolf; 1957 Best Director Oscar nominee for for Around the World in 80 Days; two other awards and four nominations for works including Summer of the Monkeys and Logan’s Run).

Tom Sheppard (Freakazoid, The Adventures of Jimmy Neutron: Boy Genius; two Emmy wins and two othe Emmy for Pinky, Elmyra and the Brain and Animaniacs; Annie Award nom for My Gym Partner’s a Monkey) and Sherry Mills (The Adventures of Pinocchio); based on book by Carlo Collodi.

Martin Landau (North by Northwest, Sleepy Hollow, The X-Files, Rounders, Cleopatra, The Majestic, Hollywood Homicide; won Oscar for Ed Wood; two other Oscar noms for Crimes & Misdemeanors and Tucker: The Man and His Dream; 21 major awards and eight other nominations for works including Mission Impossible, Without a Trace, By Dawn’s Early Light and Legacy of Lies; 79 other films and TV projects) and Udo Kier (End of Days, Armageddon, Blade, Ace Ventura: Pet Detective, Dogville, Breaking the Waves, Johnny Mnemonic, My Own Private Idaho and 173 other films and TV works).

Visual effects supervisor: Mark M. Pompian (Stargate, Last Action Hero, Multiplicity, Outbreak, To Be or Not to Be).