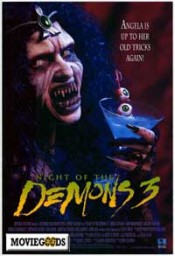 In this second sequel to Night of the Demons, teens visit a convenience store, accidentally shoot a policeman, and make the mistake of hiding out in a haunted funeral home.

Synopsis – A group of teenagers accidentally get involved in a shootout at a store and inadvertently shoot a police officer. Thinking they have killed him, they go on the run and hide out in what they think is an abandoned house. But it’s home to Angela, a powerful demon who has been living there and who quickly begins to kill, manipulate and turn the teenagers against one another.

“The movie starts off with some cheesecake right off the bat; two girls get naked in a bedroom and then look at each other’s bodies. Then it cuts to a van full of young punks up to no good. They tell bad jokes and apparently don’t like each other, despite supposedly being friends. One guy even pulls a knife on another guy, who happened to be choking the driver in the meantime. Good friends. Folks, this is classic unintentional comedy at its finest. The acting in this sequence is poor, the dialog is terrible, and the jokes are cheesy; I was mesmerized.

“It quickly gets serious though, when a routine convenience store stop turns into a Halloween bloodbath. The gang get to Hull House, Angela gets loose, and carnage ensues!

“There are some good and creative deaths in this movie. Good gore. You have the standard ‘arm through the back of the body and out of the front holding the poor bastard’s heart in her hand’ death. Good stuff.

“This movie has some hilarious parts, cool parts, cheesy parts and terrible parts. You have to take the good with the bad. The first Night of the Demons movie was a classic. The second one was just great. This one is kind of in between. I thoroughly enjoyed it.

“Overall, a good horror flick that you don’t have to think hard about to enjoy. Good fun.”

Stars Amelia Kinkade (Road House, Girls Just Want to Have Fun, My Best Friend is a Vampire, Night of the Demons I and II); Kristen Holden-Reid (K-19: The Widowmaker, The Crossing, Touch of Pink, Hendrix, Niagara Motel) and Larry Day (The Bone Collector, The Covenant, The House on Turk Street, Maurice Richard and 46 other films and TV projects).

Executive Producers: Jeff Geoffray (Around the World in 80 Days, Shergar, Silver Wolf, Behind the Red Door and 23 other films); Walter Josten (Wake of Death, O Jerusalem, Back in the Day, Bar Starz; Emmy for The Incredible Mrs. Ritchie; 28 other films and TV projects).

Film Editing by Daniel Duncan (Night of the Demons I and II, Cerberus, Guardian, Tick Tock) and Kevin Tenney (debut).

Release Data:
Night of the Demons 3 made its theatrical debut in Canada in 1996. It premiered on video a year later in the U.K. and the U.S. It hit Singapore theatres in 1998 and video in Spain in 2002.

DVD Choices:
The DVD is available in R-rated and unrated versions, with the latter having more nudity and gore.