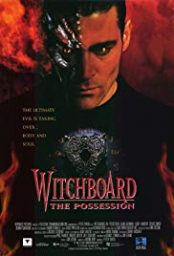 In this third installment of this successful supernatural thriller series, a down-on-his-luck stockbroker releases an evil spirit from the Ouija board.

Critics’ Kudos:
Absolute Horror review: “I was pleasantly surprised by how much I enjoyed Witchboard 3: The Possession. The murders were cool, there were some interesting plot twists and it slyly and seamlessly changed protagonists about half-way through.”

Brian J. Wright, The Cavalcade of Schlock: “The heroines of the first two Witchboard movies basically got by on their tits, but this one, Locky Lambert, seems able to act. Performances are adequate all around, actually.

“The effects are always good too – either stellarly done (the morphing is unusually good) or at least quite imaginative (like the separation sequence). It’s got some foxy women, nifty effects and a number of enjoyably cheesy moments (like when one guy is attacked by his butterfly collection).”

Major Cast and Crew Credits and Awards:
Directed by Peter Svatek (The Call of the Wild: Dog of the Yukon, The Rendering, Sci-fighters; won award for Silver Wolf and a Best Film nomination for Bleeders).

Executive Producers are Jeff Geoffray (Around the World in 80 Days, Shergar, Silver Wolf, Behind the Red Door and 23 other films); Walter Josten (Wake of Death, O Jerusalem, Back in the Day, Bar Starz; Emmy for The Incredible Mrs. Ritchie; 28 other films and TV projects) and Paul E. Painter (C’est pas Moi C’est L’autre, Going to Kansas City, The Myth of the Male Orgasm; won Gemini Award and was nominated for an Emmy for Hiroshima; Gemini nom for Urban Angel).

Film Editing by Denis Papillon (The Old Man and the Sea, Silver Wolf, The Call of the Wild: Dog of the Yukon; won an Eddie and earned four nominations for works including Hiroshima and The Baroness and the Pig).

Special Effects by Jacques Godbout (Once Upon a Time in America, Timeline, Scanners, 2001: A Space Travesty, Mrs. Soffel, War and Remembrance, Napoleon, Enemies: A Love Story; 61 other films and TV projects) and Olivier Xavier (P.T. Barnum, Punisher: First Round).